What with all the news about a possible recession due to an inverted yield curve (now, there’s a possible post, given my work for a Swaps trading group a while back), and given that someone commented on one of my old posts about a calculator in my collection, I thought it was about time to show off another one. This time we’re going to talk Business.

HP have made many business calculators, but one of them was, for its day (the late 80s), very successful. That was the HP 18C, which was upgraded to the 19B (doubling the RAM to 8Kb!), and then, finally, to the 19B II (when they reintroduced the ability for the calculator to use – wait for it – RPN!). They formed part of the Champion series of calculators, the other two being scientific calculators, the 28C and then the 28S. The design of all five was advanced for its time: a four line display, a clamshell design with a vertical hinge, and a keyboard on both sides.

(Aside: the C meant “continuous memory”, which was pretty novel at the start, but once other manufacturers introduced such a feature, HP switched to a B for “business” and an S for “scientific”.) 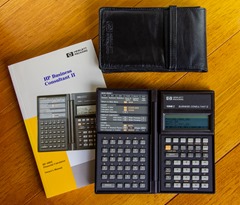 All five of these calculators were programmable, had a solver function, and were even able to display graphs on that LCD display. A graphic calculator! Even better, especially in a business environment, the calculators had an infrared LED that could control the HP calculator printers of the time (the HP 82240A and 82240B). 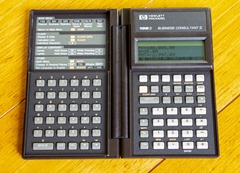 The display is showing the result of one of the financial functions the calculator comes with: Time Value of Money. In this case: what are the monthly repayments for a $100,000 loan, at 5% interest per year, over 36 months. Answer: $2,997.09 per month. Yay! (Not that I was contemplating such a loan, mind you.)

My 19B II has a bit of a weird history: I bought it new off eBay in March 2004, roughly the time when it was discontinued. I’d been looking a while, but they seemed a little expensive, but for some bizarre reason one day I happened to look for “HP 198 II”. And, boom, there it was. I bid and won and saved money (sorry, seller!). (It was about $60, with $15 shipping.) These days, that’s about how much a pre-owned one is on eBay, unless you try for the rarer ones with the battery door on the back (initially the battery door was on the side, but the springs holding the three N batteries were so fierce, a common problem with the Champion series was the side door breaking off).

It’s not a calculator I’ve ever actually used in real life, just one that I’ve bought to flesh out my collection.